Plastic frenulum of the upper lip: why do we need pruning, do I need to do and how?

What is undercutting of the frenulum of the upper lip and why do we need plastic?

Plastic frenulum of the upper lip corrective surgery undercut frenulum, which is carried out the patient has the appropriate indications for performing surgical intervention in the direction of the orthodontist, periodontist or speech therapist.

The frenulum of the upper lip is a flexible strand of the mucous membrane of the oral cavity that connects the upper lip with the bones of the jaws and enables a person to freely move my lips, easily open and close your mouth.

Normally, the bridle is fastened at a distance of 5-8 mm from the necks of the front incisors. If it is attached below, or doesn’t behind the front incisors and the place of attachment is not visible, then talking about short frenulum of the upper lip.

In such patients it starts in the middle of the upper lip, and attached somewhere in the 4-6 mm above the gingiva in the region of the gap (diastema) between front teeth. Pathology of the bridle can be detected by external examination.

Why cut the frenulum of the upper lip? The thing is that its abnormal position can cause a number of complications.

Why to perform plastic surgery?

Clipping the frenulum is necessary to avoid the following consequences:

The indication for correction is:

When is the best time to conduct plastic

Despite the fact that this procedure is easy and usually does not cause any complications for newborns do it rarely only in the case where there are problems with natural feeding.

It is better to carry out the correction when the child turns 5 years and the front teeth were cut by 1/3. If you hold the plastic in this time, the diastema is not formed, and the front incisors will grow right.

Some doctors suggest to do the operation in 7-8 years when the 4 upper incisor came out. According to the testimony of the correction is recommended to teenagers and adults.

A contraindication to plastic surgery is:

Preparing for the intervention

Before surgery you need to protonirovanie mouth as infectious foci can cause a number of complications.

Individual doctors require tests and roentgenofluorescent, but there is no special need, because the operation is less traumatic.

Before the procedure the child needs to feed, as on an empty stomach interference tolerated heavier and a starving man may impair blood clotting.

Varieties of the operation

There are several ways of plastic surgery, the choice of a particular method depends on the anatomy and fixing frenulum of the upper lip:

When frenuloplasty move the attachment point of the bridle.

The procedure is performed in two ways:

Used for anesthesia Ultracain D-s Forte, the wound is sutured with absorbable suture materials. The whole procedure last a maximum of 15 minutes.

Increasingly popular the removal of the upper lip frenum with a laser. The place of operation is processed by a gel with an anesthetic, then the bridle is routed laser optical fiber, forming a beam of light, which «dissolves» the bridle. Simultaneously, the laser disinfects and seals the wound edges.

The advantages of laser plastics:

The cost of the procedure varies from 3 to 5 thousand rubles.

My son had problems with diction. The speech therapist said it was due to a short frenulum of the upper lip and advised to make her correction.

After the operation the child began to clearly pronounce sounds. During the procedure the pain is not felt after the surgery suture left.

In most cases, complications after surgery is not observed. However, if you adjust too early in the stage of milk teeth, permanent teeth will grow crooked, the upper jaw can be formed small and narrow, which will cause progenie.

When the lower jaw is pushed forward and the upper poorly developed and by closing the jaws of the lower tooth row overlaps the top that will come to the problems with diction.

However, in each case, the doctor needs to decide individually the age at which to carry out surgery. 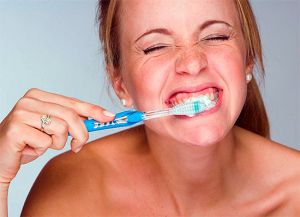 Sometimes, after the anesthesia wears off, you may receive mild pain.

To rehabilitation took place faster you need to follow some rules:

The rehabilitation period lasts a maximum of 5 days during which are all the discomfort and wounds heal.

Study on plastic will help to prevent the development of a number of dental problems. The procedure itself is painless and usually does not cause complications, so afraid its not worth it.